An algorave is an event where people dance to music generated from algorithms, often using live coding techniques, and short for "algorithmic rave." 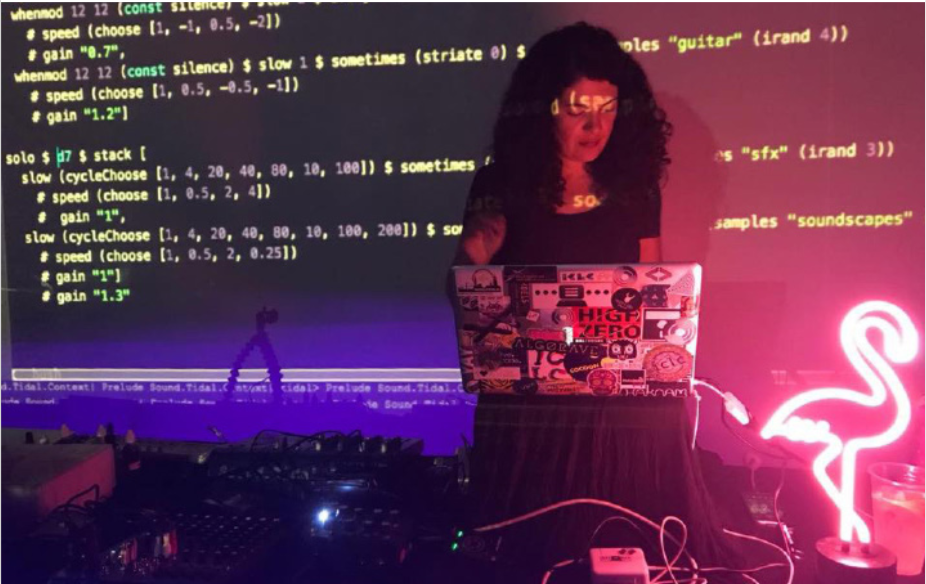 Alexandra Cárdenas Born in Bogotá, Colombia in 1976. Studied Composition at Los Andes University, where she grad- uated in 2000. She also studied classical guitar and mathematics. Her work has been played in several concert halls in Colombia, Venezuela, Mexico, United States, Europe, China and India and have also been played by many different soloists and chamber ensembles. https://soundcloud.com/tiemposdelruido 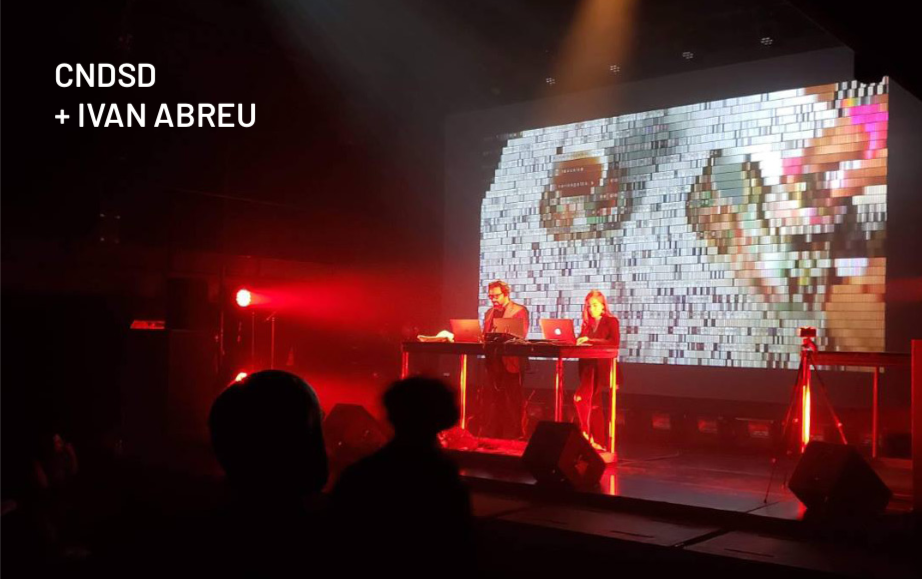 CNDSD + Ivan Abreu Their musical proposal is conceived in an experimental environment through styles such as ambi- ent, noise, data, drone, avantgard, breakcore with a strong choral and microlirical presence. In the composition and improvisation with programming employs and hacks DIY interfaces, ana- log synthesizers and recordings, generating cross border musical exercises: granular landscapes, algorithmic vocal experiments, improvisations of hypnotic noise, Live coding and rhythmic pat- terns in SuperCollider and TidalCycles. They have given concerts, at festivals such as Transpiksel, Mutek Mexico and Montreal. https://soundcloud.com/cndsd https://soundcloud.com/ivan-abreu-ochoa 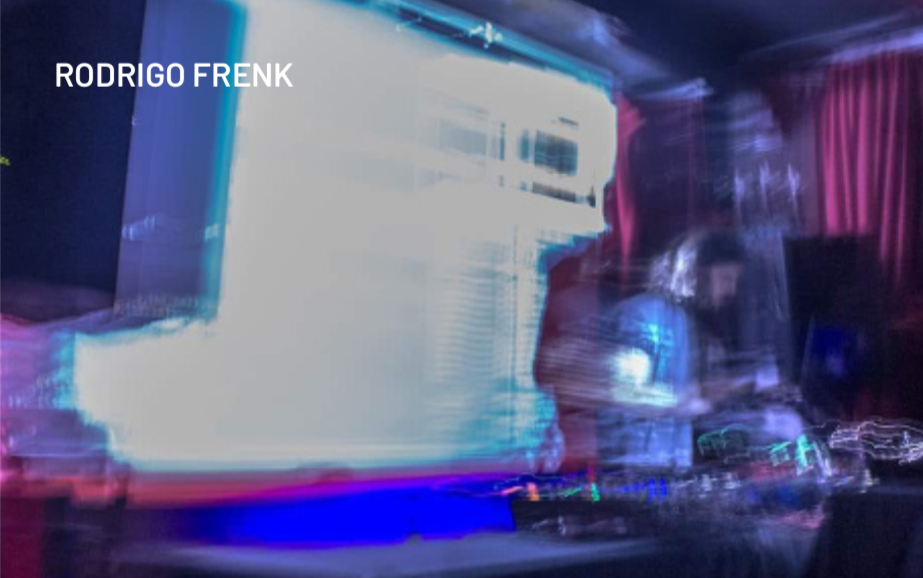 Rodrigo Frenk His interests are associated with electronic art, experimental music and the development of open source technology. He has developed technology in several branches: for artistic purpos- es, activism practices and work as a fullstack developer. He has been a member of the collective Astrovandalistas and Inverted Crater, as well as an integrator of underground rock bands such as Tiniebla, Escombro, Contra https://soundcloud.com/furenku 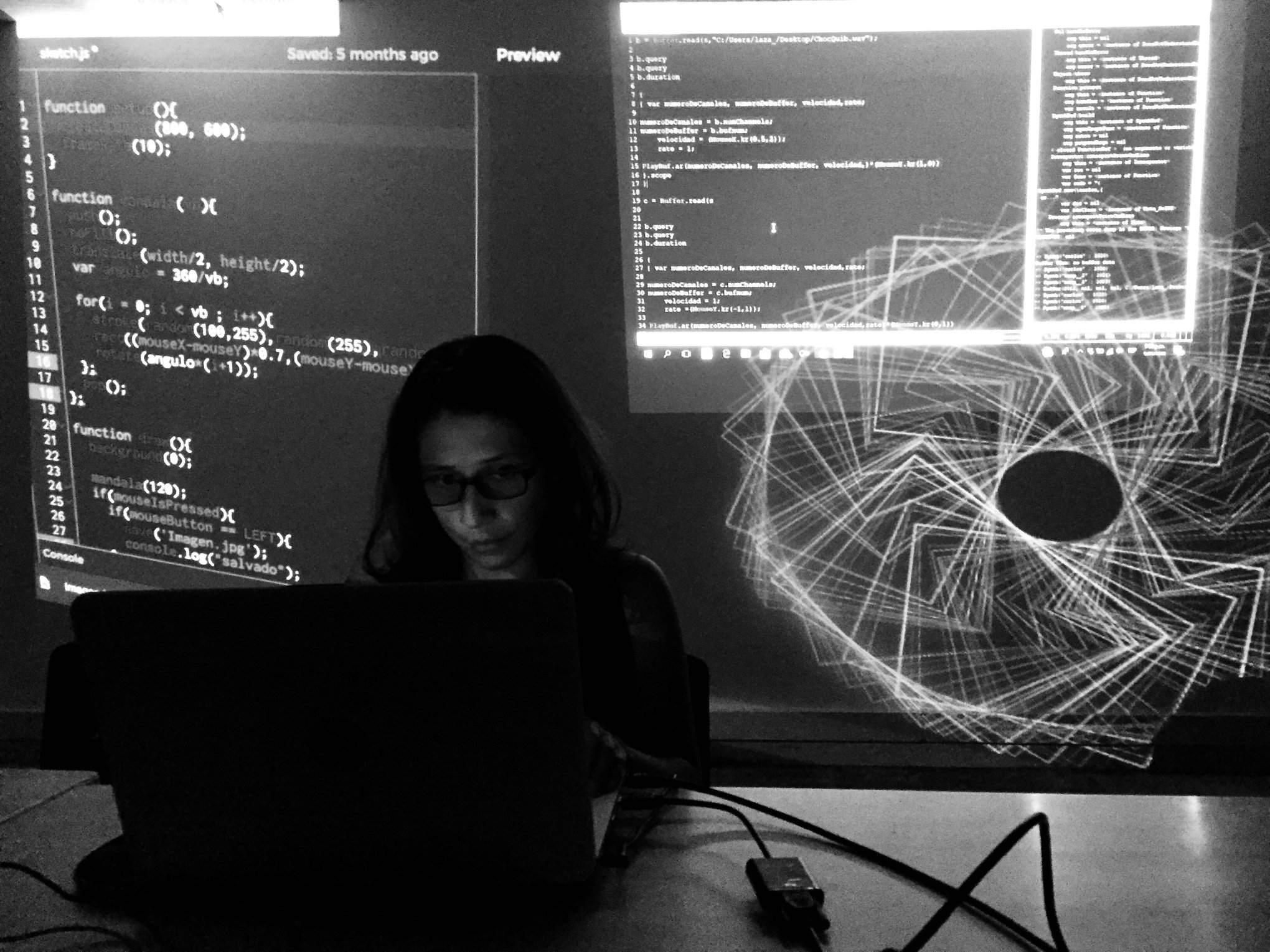 Juan Olaya + Laura Zapata Juan Olaya, obtained the degree of Computer Engineer from the Pontificia Universidad Javeriana in Bogotá Colombia in 2011, the Master's Degree in Cognitive Systems and Interactive Media from the Pompeu Fabra University of Barcelona Spain in 2014. From 2016 until now he has worked as a teacher in the university, Escuela de Artes y Letras of Bogota in the Digital Media Engineering program. During his teaching experience he has taught the subjects: Introduction to Programming, Object-Oriented Programming, Computer Graphics, Software Engineering, Artificial Intelligence for Video games and Virtual Reality. Among his research interests are: Live Coding, Human-Computer Interaction, Video Games Development and Computer Science Education. Laura Zapata is known for her fascination for explore and play with sounds. In her creations she has blurred the borders between the different disciplines that transit from the relationship and participation of the body, the plastic, the performative to representations of the historical and social issues. In her creative journey she has explored the soundscape, minimalism, deep listening, electro-acoustic, performance, improvisation and live coding. She deeply believes in the need to assume political positions and advocate for inclusion, the visibility of minorities and the defense of human rights. As a teacher, she believes in alternative pedagogical approaches that emphasize meaningful learning and the development of emotional intelligence. In her Bachelor of Music,she was apprentied to professors José Miguel Luna and Daniel Álvarez at the Universidad del Bosque in Bogotá,Colombia. 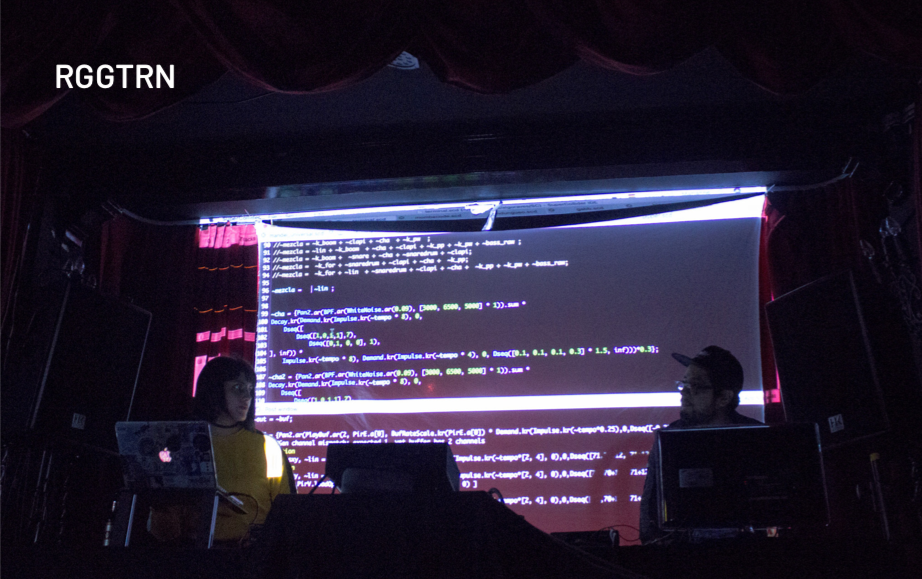 Emilio Ocelotl + Marianne Teixido RGGTRN (pronounced reɣɣaeˈtɾon), originally an electroacoustic and mixed music duo founded in 2012 in Mexico City, has evolved into a collective that engages in algorithmic dance music and audiovisual improvisation informed by the Latinx context that revolves around its members. https://soundcloud.com/rggtrn 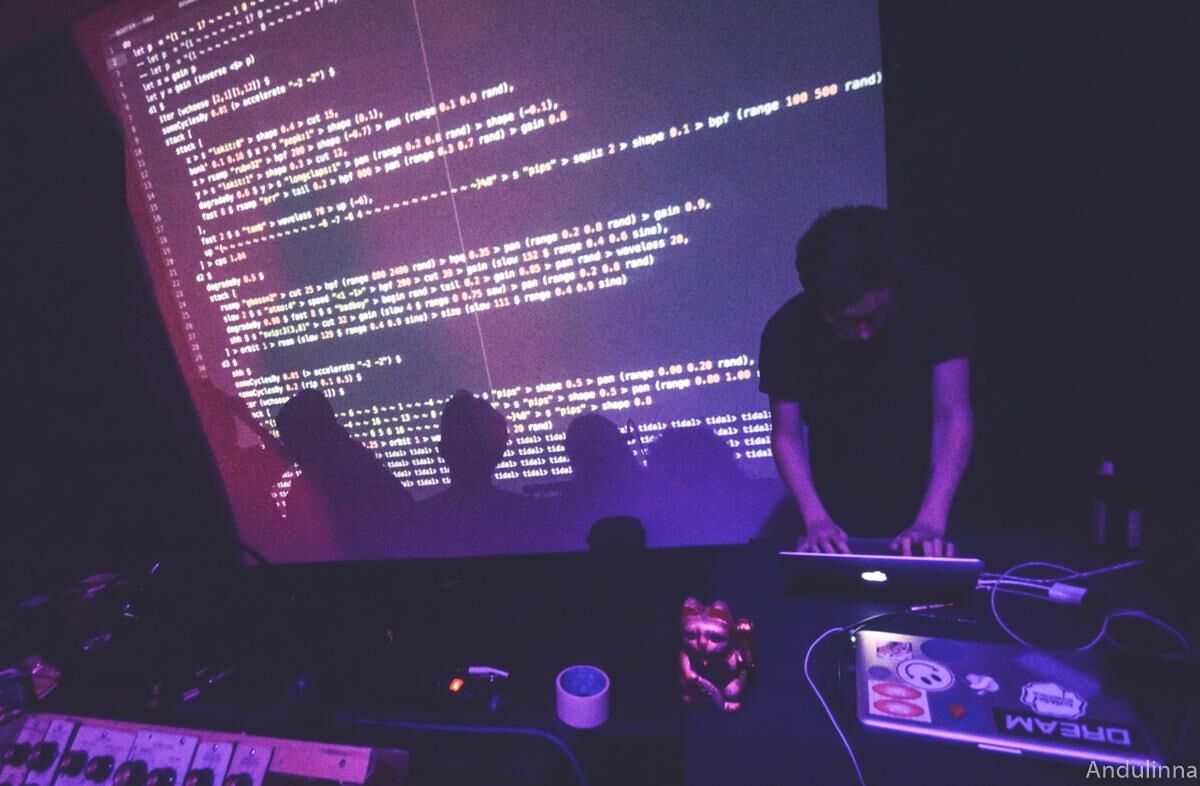 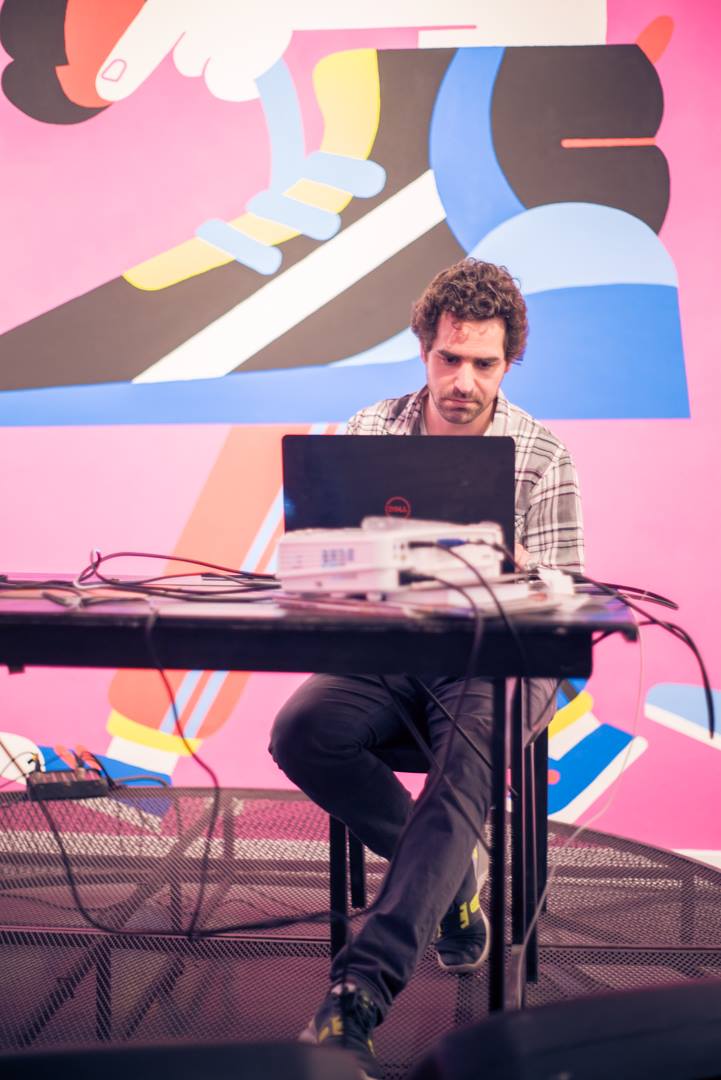 Diego Dorado programmer and electronic artist. I am passionate about research projects that combine technological innovation with artistic expressions. I have worked as a Web Developer, Desktop Developer, Video Game Developer, Systems Consultant, Composer, Sound Designer and as an Educator. As an artist I have participated in various works of electronic art by coding on microcontrollers, videogames, signal processing, audiovisuals, live programming, sound data and interactive webs; as well as for different formats: virtual reality, augmented reality, fulldome, mapping, audiovisual performance, sound installations and e-textiles. Performance: Live-emojing is an audiovisual performance. The code is projected so that it is seen how it is manipulated to generate music and visuals.💻🎼 People can participate (even if they do not code) by sending emojis from their phone 📱😎😱🤖. These emojis get to the code 📟👾and modify the music we code alltogether